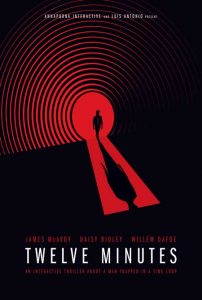 (Available for Xbox One, Xbox Series X and S and PC)
(PC version used for review)

Twelve Minutes is a point and click narrative game developed by Annapurna as an Xbox console exclusive with a day 1 release on Xbox Game Pass for subscribers. The game uses the narrative device of a time loop. You play as an unnamed husband (played by James McAvoy) coming home to have dinner with his wife (played by Daisey Ridley) who has a big announcement. The evening is interrupted however by a Cop (played by Willem Dafoe) breaking in and arresting the wife for the murder of her father, and demanding the location of a pocket watch. The husband is killed before the location of the pocket watch is learned. The game then rewinds to the beginning, and the husband finds himself at the start of the evening and must repeat the same 12 minutes over and over again to find a solution. This is done by using the items, the environment and the other characters routines to learn more and attempt to end the time loops. Think of it as a less conventional puzzle game with a ticking clock.

Twelve Minutes is an ambitious project with some cool ideas, but the execution does not really work. The puzzles are little too cryptic and will have even the most dedicated puzzle gamers reaching for a guide out of frustration and believe me the time sensitive nature of the game will have you frustrated. By the third hour mark I was so bored of the game, and repeatedly doing the same thing over and over again that I did give up and get a guide because I really wanted to see the ending. The story has good intrigue but it loses its lustre later down the line and the ending is terrible. It is not the worst thing ever, but it is not too good either

It might be cheaper than most games, but I would say that if the trailer made you curious, then sign up to Xbox Game Pass (if you have not already), and check it out that way because you can play something better afterwards. I would also recommend having a YouTube guide on standby while you do, and listen carefully to what they say you are not getting to the true ending without it.