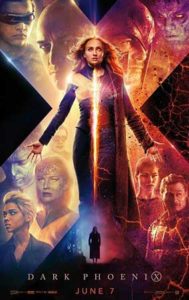 Dark Phoenix might not have been shot to be the end of an era but due to recent events it now transpires that that is going to be the case.

But Disney’s acquisition of the X-Men franchise, along with their purchase of 20th century Fox, it’s been all but confirmed that this will be the final entry in this series of X-Men films.

They have gone on for so long at this point. The first film came out in the year 2000. The Dark Phoenix arc is something that has been talked about amongst X-Men fans for quite some time. It’s one of the most iconic storylines. This isn’t even the first time that this story line has been adapted for the big screen. It was previously also adapted for the movie X-Men: The Last Stand which really did a bad job of trying to merge itself with ‘The Cure’ storyline to minimal effect.

Now, that being said, this time stepping into the director’s chair for his first feature length film, we have Simon Kinberg. His previous directorial credit being an episode of the rebooted Twilight Zone. He’s hardly a non-factor as far as the X-Men Franchise goes. It feels rather appropriate that he’s directing considering just how much he’s been involved with the series. He’s was a script writer on X-Men: The Last Stand, Days of Future Past and X-Men: Apocalypse.

If you’re aware of the Dark Phoenix saga and have actually read Chris Claremont storyline, then throw them out the window!! Rather like ‘The Last Stand’, this is not a very good adaptation of Chris Claremont’s’ story. ‘The Last Stand’ this time takes place in the 90’s and during a mission into space that the X-Men were evolved in, Jean Grey (played by Sophie Turner) absorbs what they believe at the time to be a solar flare. This starts to overload her powers and many aspects of her past start coming back to haunt her. Meanwhile, there’s also a group of villains led by Vuk (played by Jessica Chastain) that want to harness this power for themselves.

The other X-Men films have toed the line between being adaptations of the storylines that they’ve been running with, while also being their own thing. Many films have done this to varying successes. ‘Days of Future Past’ is a fine example of a film that comes squarely in the middle, whereas ‘Logan’ is an example of where it excels.

Dark Phoenix is really on the lower tier. It is so… dull and depressing. There is at no point in this film where it feels like an X-Men film. Its either way to jovial or way to depressing. And not in the way that make you think, like the really good X-Men films do. The sense of prejudice against the mutants is almost an afterthought. This kind of feels like they’re really trying to imitate the MCU (Marvel Cinematic Universe). This is especially apparent with the villains who are, without a shadow of a doubt, the worst villains in any of the X-Men films.

Look, I still stand by even with this film Origins Wolverine is the worst movie in the franchise, but this is a damn close second to bottom. Oh yea, The Last Stand is a better movie than Dark Phoenix. How’s that for a hot take? But the reason I really don’t like it is because even ‘Origin Wolverine’ and ‘The Last Stand’ had better villains than Dark Phoenix does. I couldn’t tell you a thing about them. The film is so unconcerned with these films that they just turn them into generic alien invaders. I know nothing about these villains! Jessica Chastain is being praised for her part in this film in several other reviews, and she’s trying her hardest, but she has absolutely nothing to work with. Not to mention that the rest of the cast have terrible written parts. What did they do to Beast in this movie?! He acts so out of character throughout most of this movie. And he’s not the only one.

The recent franchise problems have seemed to be that the characters are getting almost rewritten with every movie. This film has even less character consistency. Not to mention there’s tons of retcons and continuity errors for the franchise especially considering how Days of Future Past ended which is now incredibly contradictory of several of the events in this movie. What’s more, Dark Phoenix is this final film in what is now 19 years’ worth of movies, there’s nothing conclusive about it. There’s not even anything feeling very epic about it. It’s just rather…there. It’s not a celebration of the X-Men franchise, it’s not even a very good film all together. Charles Xavier for example is really shot down in this movie. And yea I know he does some dumb shit in the comics but he’s not this dumb. And once again it contradicts stuff that’s been established about the character and oh good god what is up with the script for this film. There’s virtually no character to anything. It just, like, goes, from moment to moment hoping it would all cohesively come together.

The final action scenes actually don’t feel like they should be the final portion of the film. It almost feels as if there was meant to be another scene after it, which then got cut. It’s a fine example of a film that has clearly had its issues messed around with by the studio demanding reshoots. X-Men: Dark Phoenix is an appalling film and a terrible way for the franchise to bow out as plans are already been put in place to potentially be folding the X-Men characters into the MCU with Disney’s acquisition of 20th Century Fox. As it stands Dark Phoenix is genuinely one of the worst movies out of the bunch. Its depressingly lazily written and it’s just a damn depressing and boring movie altogether. It’s a terrible adaptation of its comic and storyline and just a terrible movie altogether. Sophie Turners’ Jean Grey saves the film in quite a few regards and though it’s at the expense of the other X-Men, it’s now basically the Jean Grey movie featuring X-Men, with lazily written characters and poor plotting. But that’s the only nice thing I have to say about the film. This one actually kind of made me angry at how poor it was. If there is actually a plan to bring out new mutants, I really have stopped caring at this point. If you’re going to fold the characters into the MCU do it now because no one will care if you kill this franchise now.

Well that’s me for another week. Join me next week when I’ll be looking into the newest entry from another film franchise from when I was a kid, it’s Men In Black international. With that being said, thanks for reading this. I hope you enjoyed reading this review as much as I enjoyed writing it.
Calvin – Nerd Consultant
Share This Post: