What do people think of the story line? 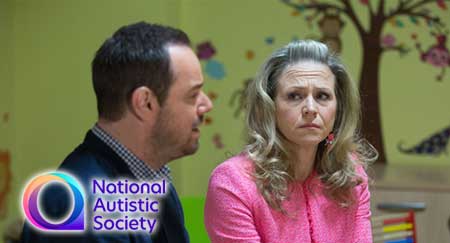 Tonight’s episode of EastEnders saw the start of a new storyline for the Carter family, which follows Linda, Mick and their young son Ollie on their autism diagnosis journey. We’re really pleased we can now announce that, for the last six months, our charity has been working with the script team at EastEnders on this important story.

Our Director of External Affairs, Jane Harris, said: “We were absolutely delighted when EastEnders contacted us to say that they were planning to introduce an autistic character into the show. We jumped at the chance to be involved with the storyline because we recognised that it was a fantastic opportunity to help millions of viewers understand more about autism.

“There are over 700,000 autistic people in the UK and most people know someone who is autistic, whether it’s a friend, classmate, colleague or family member. Yet only 16% of autistic people and their families feel the public understand autism and half of autistic people sometimes don’t leave the house because they’re afraid the public won’t understand them. So it’s hugely encouraging to see more TV drama writers representing autistic characters in their work.