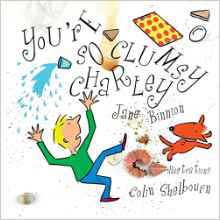 This book was recommended to me by a parent.  It was published in 2013 and somehow I seem to have missed it.  I note that in 2015 the British Dyspraxia Foundation ordered several hundred copies to be put into primary schools to help children understand more about Dyspraxia.

The book is by and large mostly illustrations and starts off with Charley getting into trouble and being punished for things.  He then goes to stay with his Aunty Bella who says that she is like Charley and she also introduces him to a number of other people who have succeeded in their chosen field such as photography, banjo playing, cake maker and so on who she describes as all being like him and her.

It doesn’t shy away from the fact that Charley will stock knock things over, trip up and can’t catch but talks about exploring what Charley is good at and it ends with the following

“so Charley was still clumsy and forgetful and lost things but more importantly he knew he was clever and creative which made him confident and cheerful”.

The book at the end also talks about a website www.funkygerbil.com which I then visited and it has some very interesting books that are either published or in the state of being published that I think would appeal to young people.  I am therefore recommending that people have a look at the website and I shall be bringing the book to give to Autism Inclusive at our next monthly post-diagnostic support group which is on 8 June 2016.