End the abuse of autistic people & people with a learning disability in inpatient units – Change.org 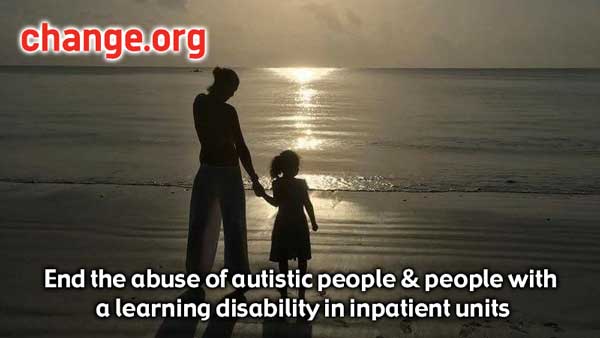 Alexis Quinn started this petition to Government of the United Kingdom

My name is Alexis Quinn and I am autistic.

In 2012 I was detained under the mental health act for almost three and a half years. I spent time in various psychiatric hospitals and an Assessment and Treatment Unit. The reason I was there was because I am autistic and other people, who were not experts in autism, decided I should not be allowed to leave. Whilst there I was drugged, restrained, secluded, put in long term segregation. I was mistreated.

The events witnessed in the recent Panorama documentary ‘Hospital Abuse Scandal’ and which I detail in my book, Unbroken, showed vulnerable adults who are autistic or have a learning disability being abused and mistreated. These events were truly shocking but because of my experiences, I did not find them surprising. That’s why I’m working with the National Autistic Society to try and bring about change.

To watch the denial of vulnerable people’s human rights should be regarded as a national scandal but all the more so considering the Government has failed to stop the use of inpatient units such as Whorlton Hall, through its recently-ended Transforming Care programme. Over 2,000 children and adults remain locked up despite Government promises to end their use.

This is not a question of money, or funding – millions of pounds are spent on keeping vulnerable children and adults locked up hundreds of miles from their homes. This is about where the money is spent and what kind of service it is spent on. Autism and learning disabilities are not a mental health condition.