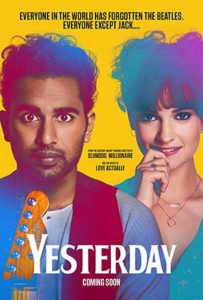 Yesterday’s a film I’m really not the biggest fan of reviewing because I’m not the biggest Beatles fan in the world. When I saw the trailer for this film, I genuinely thought it was a joke. I genuinely thought no one has come up with a film this ridiculous, but it’s definitely actually happened. But it gets even worse when you realise that the screen play’s been written by Richard Curtis and has been directed by Danny Boyle of all people. This is their first time working on a feature film, having previously worked together on the Olympic Opening Ceremony.

The story itself comes from Jack Barth, a television screen writer who’s been kicking around this story for years hoping someone would pick it up. It maybe should have occurred to him that there were a reason people weren’t picking it up. That being said, I’ve done a bit of research into it and his ideas might have been a little more interesting than what we got but I’ll get into detail about that later.

So in case you haven’t seen the trailer for this film, it’s about a musician named Jack Malik, played by Himesh Patel, who gets into an accident during a massive black out across the entire planet and when he wakes up he discovers that The Beatles never existed in this universe and he’s the only one who remembers them. With that being in mind and himself being a struggling musician, he decides he’s going to re-record all The Beatles’ songs and get all their songs out there as if he wrote them.

Ok, here’s the thing. If you’re going into this film with the idea that this is going to be some genuinely interesting work with some real interesting consequences of what a world that didn’t have The Beatles would be like, strike that from your head! This film has no business with that. There are a bunch of other things that go missing, for example Coca-Cola never existed and now there’s only Pepsi (though I don’t see how that’s a butterfly effect from The Beatles not existing). In fact, our idea of the Beatles never existing and the butterfly effect from that really has not been considered a factor. The biggest difference is that there’s no Oasis in this universe. Which fortunately means we never have to hear terrible karaoke versions of Wonder Wall, anymore, thank God!

The best way to describe this film is if you thought that the Olympic Opening Ceremony was good, I’d say this is the reverse of the Olympic Opening Ceremony. When you watch the ceremony, you can see a lot of Danny Boyle but not as much of Richard Curtis. This film’s the other way around. I see all of Richard Curtis and I barely see anything of Danny Boyle. I don’t see anything of his style, his direction. I’m a big fan of Danny Boyle and I know he changes his style quite a bit and all of his films are very different to one another and he’s very versatile but even with all those films you can see a bit of Danny Boyle.

Look at his catalogue, Slum Dog Millionaire, 28 Days Later and Trainspotting are all very different films, but you get a sense of Danny Boyle meticulousness to it. Richard Curtis is not a writer and director I’ve gone on about much since he’s pretty much stopped directing movies for the time being. As a result of which, I haven’t really reviewed many films that he’s been making over the last few years. Personally, I’m not a big Richard Curtis fan. My problems with his films are generally that he writes scripts without consequences for his characters and his endings are way too perfect. Something that this film has a real sense of.

Whether you like The Beatles or not, they were, at the end of the day, a cultural phenomenon. They made some of the music that defined the 60’s. Take for example Peter Gabriel, in a world where Sergeant Pepper’s Lonely Heart Club Band doesn’t exist, is his level of experimentation going to become a factor? Sergeant Pepper also could be linked to prog rock. You’re living in a world potentially with no heavy metal because Ozzy Osbourne doesn’t get inspired to join Black Sabbath, as Ozzy Osbourne was directly inspired by the fact the Beatles had success out of Liverpool so why would a kid out of Birmingham have a chance at success? There are all sorts of questions like this. And it’s not to mention all the solo projects and what those meant. What John Lennon did in his solo career.

That’s what I mean when I say there’s not enough care and effort put into the script. You have this premise on your hands which could potentially be interesting, and it’s basically used to make a typical rom com. This feels like it could be set in the same universe as Love Actually.

Now that being said, we have to talk about the covers of The Beatles. The songs covered are actually done pretty well and all things considered I really think they were done pretty well. Himesh Patel, as it turns out, actually does have some musical talent. In fact, he’s actually one of the better parts of this film. He does have some good lines and some good laughs occasionally and gives a good performance. I’d say that as long as everyone else in this one has the typical over the top Richard Curtis style to them, this is also the moment we realise that Richard Curtis has never met a record executive in his life and came out with the biggest stereotypes he could possible. If you’re not the biggest fan of The Beatles you’re going to be really annoyed by the amount of eulogisation they get in this film. The cast are trying really well but half the time they’re not given interesting characters to play. Lily James, who’s a very talented actress, has a character that’s written so bland that there’s nothing that she can add to the role and that’s a shame because I really like her performances in many films, particularly her performance in Cinderella.

You also get a few smaller roles for actors like Sanjeev Bhaskar and Meera Syal as well as Vincent Franklin and Joel Fry, who basically plays the typical romantic comedy best friend character. You might recognise him in his role as Hizdahr from Game of Thrones. There are also a few real-life cameos including Ed Sheeran who I don’t think learned from Game of Thrones and Bridget Jones’ Baby that we didn’t want to see him act. As well as James Cordon who is in way too much right now and, of course, your suspicions are correct there is a sort of Beatles cameo and its one of the strangest things I have ever seen in my life. Really just to see the sheer absurdity of it is worth a watch alone. I was amazed about how insane it was.

Yesterday is a film that does a good cover of The Beatles as an interesting idea, but it ultimately does not execute it very well. It seems very flawed and a very by the numbers rom com that’s very typical of its writer and feels like it’s not ambitious enough for its admittedly ambitious director. It’s plot line left me wanting more and it didn’t really make me feel hateful, it just made me feel rather annoyed. Especially considering that, for a Richard Curtis script, nothing has any consequce to it what so ever and it feels like we’re getting into a stage of ‘ How British can we make this?’

If you like The Beatles this will probably be one for you. Danny Boyle fans will probably find this to not be up to the standards of his previous works, but Richard Curtis will definitely get a load out of this. It’s the kind of film I’d expect to see on around Christmas time. And I think if you like films like Four Weddings and a Funeral or Love Actually it’s going to dictate how much enjoyment you’ll get out this film.

And that’s it for me this week. Next week I go back to the Marvel Cinematic Universe to check out what’s happened after End Game with Spiderman: Far From Home. With that being said, thanks for reading this. I hope you enjoyed reading it as much as I enjoyed writing it.
Calvin – Nerd Consultant
Share This Post: