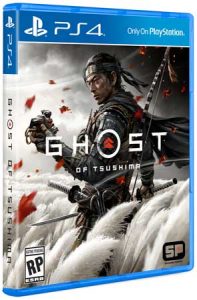 (Available for PlayStation 4 only)

After being apart of so many Sony E3 press conferences and state of plays, Sony is finally releasing what could be the last big PlayStation 4 exclusive game on a platform that is already loaded with tons of exclusive games (even more if you say console exclusive and include ones which got ported to PC). Ghost of Tsushima, developed by Sly Cooper and Infamous developers Sucker Punch, bears a resemblance to many games set in 13th century Japan with Samurai but when shown in trailers in both graphics and the way that game would play it looked set to stand out. now in practice it hasn’t entrily been the case, comparisons have been made to Assassins Creed which are not unwarranted this game is very similar to Assassins Creed in many ways though I personally think it’s combat style and setting does separate it out enough to be it’s own thing. Ghost of Tsushima is a game set during the Mongolian invasion of Japan with a group of Samurai defending the island of Tsushima only to be foiled by the forces of Khotan Khan Grandson of Gengis Khan and results in the capture of main character Jin Sekkai’s uncle. The game follows him traveling the land dealing with the Mongol invasion and recruiting an army of new samurai to save his uncle and retake the island of Tsushima. If you’ve played any open world game the last few years you know what to expect.

Ghost of Tsushima is a fine swansong to the PS4 and really works for being a sword combat game with some amazing stance mechanics weaved into it , a stealth game and an open world game all in one. what holds it back for me is that for whatever reason by the time I got to the third act I lost incentive for the side quests and I will say throughout some felt like busy work which is more a me personal thing rather than a larger criticism of the game. But it looks amazing and has a story that really gets good as the game goes on and it really is joining the list of excellent PlayStation 4 exclusive games.

I reckon you absolutely should buy it though be aware it’s a large download file so get your PS4 ready in advance. it’s quite expensive now coming in at about £50 but if you passed up The Last of Us 2 because you weren’t interested for whatever reason this is a game you really should splurge because there’s a lot of game time.
Calvin – Nerd Consultant
Share This Post: