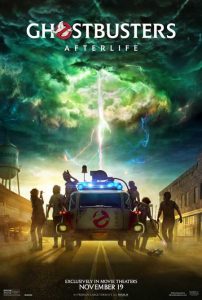 Ghostbusters: Afterlife is the newest entry in the franchise, and unlike the 2016 film which attempted to be a reboot for the franchise, Ghostbusters: Afterlife, was set to be a continuation and would act as a tribute to long-time fans. One of the notable inclusions this time round is director Jason Reitman, son of original film director Ivan Reitman, and he also shares a screenwriting credit with Gil Kenan. Now, Jason Reitman is actually an accomplished director in his own right and I really like a couple of his films. I was particularly a fan of his teen pregnancy comedy, Juno, and one of his more unsung films, Thank You For Smoking, a film that actually has an interesting point to say which feels even more relevant now than it did when it came out in 2012.

Ghostbusters: Afterlife was promoted very heavily on the brand-new young cast, most of whom will be taking a large portion of the film, and I’ll get into my thoughts on that in a moment. But it definitely looked like there were some new ideas coming to the franchise, something I felt was missing from the 2016 film. Now, I wasn’t someone who hated the 2016 Ghostbusters film; I didn’t think it was good but I thought it was average at best and was bogged down by a lack of new ideas and quite a few jokes that didn’t really land. It definitely didn’t help that the cast was asked to improvise quite a bit. No disrespect to the actresses involved—they actually all are talented at improv but they weren’t given much to work with. Plus, I don’t think Paul Feig was the right person to be directing a Ghostbusters film. Again, he’s a talented director in his own right but I don’t think he had the right approach for a Ghostbusters film.

I won’t go too much into the plot since there are actually spoilers in this which you really have to watch out for, and I would really recommend not looking up the IMDB page since it gives away a lot of what’s going to happen. It’s basically about the daughter of Egon moving out to his farmhouse in Summerville along with her kids Phoebe and Trevor, played by Mckenna Grace and Finn Wolfhard, where they later learn that Egon was looking into some unusual activity in the area. They start to uncover what he was working on and try to stop an incoming invasion of spirits. Now, from what I’ve just stated, one thing is pretty accurate: this is the first Ghostbusters film not to take place in New York, and actually when I heard that I kind of felt it was a bit of a weird decision since a lot of the comedy came from the setting. That being said, however, with the final product now out, it’s kind of a cool choice because it at least feels like something new. The setting has definitely been chosen because of another project which came out a few years ago, most notably Netflix’s Stranger Things. The young cast has definitely been chosen because of its success and the setting is also very similar to that setting, a sort of idealised version of the 60s and 80s nostalgia. And, considering that this film is a bit of a nostalgia boom, they’ve done a pretty good job all things considered. There is a lot of Ghostbusters iconography in here: the traps have been brilliantly created, the ECTO-1 is brilliantly recreated, and the effects felt like good modern updates. The ghost designs that are used in the film are actually pretty good as well. There’s not as many as, say, 2016 but it’s not a bad selection overall, and there’s much more attention paid to the horror elements of Ghostbusters. I’m not the first reviewer to state that it does feel like there’s a bit of mild horror in this film, something I noticed was very lacking in some other films.

The cast also works quite well because the young actors actually are pretty good, especially Mckenna Grace as Phoebe who really steals the show and is probably the best performance in the film. I also felt they made the character of Podcast played by Logan Kim pretty cool; it’s quite hard to made a “quirky” character work in a film like this one but somehow the kid pulls it off. One of the things I think will be surprising for people is just how much the young cast is brought to the forefront—most of the adult cast who are played by very established actors aren’t really in the film as much as you’d think. Looking at you, Paul Rudd! I really expected Paul Rudd to be in this a lot more than he is, especially considering that not only is he a very good comedy actor but he’s probably right now at the height of his popularity coming off playing Antman in the Marvel Cinematic Universe. When Paul Rudd is on screen, he’s actually very good; the problem is he’s not on screen enough in my opinion. He plays a sort of lazy summer school teacher who just puts on movies for students while he gets on with his work in the science of measuring the movement of tectonic plates in the area, but there’s actually a point in the film where he’s taken out for quite some time.

Now, talking about the next lot of information about the film is going to require tiptoeing around some spoilers so I’ll do my best to avoid it to give people who haven’t seen it a chance to experience it. The bottom line: My big problem with this film is that it relies too heavily on the nostalgia. I got most of what was going on because I’ve watched the original Ghostbusters a lot but my thought process was that if you weren’t heavily into Ghostbusters or hadn’t memorised a lot of it, some of this stuff might end up going over your head. And there are times when it doesn’t half feel like it’s repeating itself a bit; the film does have some quite original ideas but then it sort of gives up about halfway through to say, ‘Now let’s just stick to old reliable’. That’s not to say the reliable is bad—some of those moments are really good, and it’s actually where some of the best comedy in the film comes from. But where it fails is in how it ultimately feels like it’s there to make up for the fact that it’s really worried about how the film’s going to be perceived. This is a film that feels like it was going in bold new directions for the franchise while also paying a nice homage to the original, only for it to kind of chicken out at the last minute. Again, if I really wanted to emphasise why, I feel like I’d have to go into a lot of spoilers, which I won’t be doing. But I will say that the film is a very nice tribute to Harold Ramis who is the only one of the original quartet to no longer be alive at this point in time, and it’s a really nice sentiment that you can really tell his memory was at the forefront of much of the making of this film.

I’m sorry to be vague about all this but I really feel it’s necessary if you want to go in with the freshest perspective, and I think I’ve worded it in a way that if you seen the film you kind of know what I’m on about. Ghostbusters: Afterlife is a valiant effort to do a bold new direction of the franchise that kind of works but is so reliant on nostalgia from the original that it’s often to it’s detriment. The young cast elevates the film, the action sequences are pretty good and there are some genuine laughs in here, but I didn’t feel like this film fully landed. I think it’s an okay film but not an amazing one. If you like Ghostbusters though, I think you should see this as it definitely made with the fans at the forefront of its mind.
Reece Imiolek
Anime Amigo and Nerd Consultant
Share This Post: