LDT – Sir Stephen Bubb on the future of transforming care 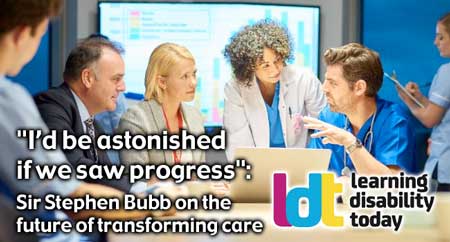 “I’d be astonished if we saw progress”:

Sir Stephen Bubb on the future of transforming care

In the wake of the Winterbourne View scandal, charity boss Sir Stephen Bubb authored one of the key reports that urged an end to controversial long-stay hospital care. Here, he tells Darren Devine why the transforming care initiative – designed to move people back into their communities – now seems certain to fall way short of its ambitions.

The philanthropist Samuel Gridley Howe, in the mid-19th century, told of the evils of life in an institution. He wrote of how “all such institutions are unnatural, undesirable and very liable to abuse. We should have as few of them as possible, and those few should be kept as small as possible. The human family is the unit of society.”

Transforming care – a call for change

When Sir Stephen Bubb penned his report ‘Winterbourne View — Time for Change’ in 2014, it was riven through with Howe’s anti-institutional philosophy. He used Howe’s words in the foreword to his groundbreaking report and called them an “essential truth”.