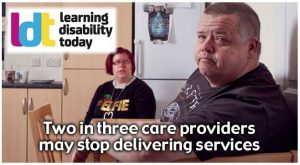 Scope is the biggest provider to have already started withdrawing delivery of all physical services.

Around one in three care organisations may stop providing services as new debts have made them unviable.

Providers say they can’t meet financial responsibilities imposed on them by tribunals.

67 percent of those who responded expect to have a budget shortfall in the coming financial period.

Out of those considering different approaches to address the potential shortfall in funding, 56 percent are considering handing services back.

22 percent of those surveyed said that they would have to sell properties to cover the shortfall.

34 percent of those surveyed said that there would be a threat to the viability of their organisation if there’s a requirement from HMRC to back date payments to staff for two years.

This figure rises to 68 percent (more than two in three) if the requirement is to back date for six years – as is required by current government guidance.