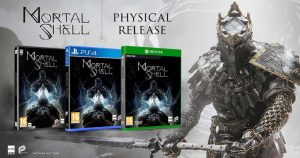 No doubt we’re all eagerly awaiting the release of the Demon’s Souls remake, which is being released as a launch title for the PS5 on the 19th November 2020 (12th November in America and Japan), as well as more information on the upcoming Eldin Ring. As a massive souls fan myself I am struggling to contain my excitement and patience as I suffer the agonizing wait for these games to finally be released to us. Luckily however, to satiate our lust for difficult bosses, incredible environments, and a countless number of deaths, we have been kindly given Mortal Shell.

Mortal Shell was first released on the 18th August 2020 (so yeah we’re kinda late to this… oops), it was developed by Cold Symmetry and published by Playstack. The game had a closed beta released exclusively on the Epic Game Store, and was also released on the PS4 and Xbox One upon the full release, with a Steam port scheduled for release in the latter half of 2021.

Mortal Shell plays in a soulslike style of gameplay, which, of course, means that it focuses on large terrains for you to explore, difficult enemies with specific attack patterns for you to learn and master, and a large number of deaths that you will no doubt accumulate in the hundreds. While it follows very closely to the combat and gameplay style of the Dark Souls series, it brings with it some mechanics that make it very unique. One of the main ones is the harden ability (don’t you even dare), which allows you to defend against any attack making you impervious to any damage that the attack may deal, the effect lasts as long as you are holding down the L2 button so won’t have to worry about wasting it, though it does also end after you get hit while hardening, afterwards it will have need a few seconds to cool down before you’re able to use it again. You can also use it while attacking, the attack will pause briefly and resume when the hardening effect is gone. Another difference is with these things called shells that you inhabit. There are a total of four shells in the game, all of which are found in the first area of the game, each of these have different preset stats, like one having more health or one having more stamina, letting you pick between them quickly to determine what kind of playing style you’re accustomed to in other soulslikes. When you die, you will be pushed out of the shell you’re inhabiting and will have to quickly enter it again or else you will end up dying in one hit, afterwards if you die in your shell a second time, you will die for good and will be forced back to your last checkpoint.

The game also looks absolutely amazing. I played the PC version of the game and it looks absolutely stunning, and ran at a very consistent 60fps, I didn’t once notice the frame rate or the quality of the game dip once during the hours that I played as well, which really shows off its quality. There is also a lot of detail in the character designs, each of the shells you are able to inhabit are strikingly different, with an incredible amount of detail put into each one. As usual in soulslikes, the voice acting is really great as well, I would happily say that the voice dialog and acting are on the same level as any of the Dark Souls games.

So you’re probably thinking that this game is worth your time seeing as so far I’ve given it nothing but praise. Admittedly though, despite all the good and potential that I think this game has, I gave up on it before I could even get past the second area, not because of the challenge that it brought, but simply because I found this game to be an absolute pain to play and a complete slog to get through.

The game takes away a lot of the soulslike formula which I didn’t really think about, but that I now appreciate a hell of a lot more because it was missing in this. First of all, it abandons an upgrade system that you would find in a traditional soulslike, that being to collect experience in the form of souls or blood echoes and use them to upgrade individual stats your character has, and instead has upgrades to your armour like small new moves or being able to exit your shell upon death more than once. The problem is it never really feels like I’m getting stronger. Because I’m not improving on my strength, so I’m not able to deal more damage, nor on my vitality, meaning that my health bar isn’t getting higher, it never feels like my character is getting stronger as I play. Which also means that the souls I’m collecting, which is called Tar in this game, from killing enemies feels much more useless so no fight feels worth going through. Instead of battling an enemy to help make my character’s stats improve, thus making me stronger, the battles feel hollow and monotonous very quickly, especially since the fights will always last the same amount of time so the tedium comes in very quickly. While there are upgrade materials for your weapons, in which there are five of in the game, the benefits you get from them do very little, yeah you get more attacks and may be able to do a little bit more damage, but it still does very little to make me feel like my character’s improving.

I know that it’s the same in Sekiro: Shadows Die Twice, which I will admit is one of my favourite games by From Software, but here’s the difference, Sekiro has a very different style of combat that focuses less on damaging your enemies health and more whittling down their defences so you can deal the killing blow, if it had the same traditional upgrade system as Dark Souls it would likely either be very minimal or it would break the game, and even so you are still able to upgrade your strength and vitality. However this game does play like a traditional soulslike so that fact that it doesn’t use the normal upgrade system makes no sense. Even in Code Vein, while you weren’t able to increase stats individually you were still able to level up and make your character stronger as you played the game.

The worst part of the game, however, is the areas in which you explore. Just like other soulslikes the areas you explore are massive, with many ways to go and explore to your heart’s content and many enemies for you to slay. While this may seem like a good thing, and I would agree, the problem is that it’s too open and everywhere in the area looks very much alike, meaning that you’ll end up getting lost a lot. There are few to no signs of where you are meant to go unlike in other soulslikes, in those games while you are able to explore and can get lost easily, you can still find the right way to go without a map without too much issue, when exploring these areas I feel like I need to carry a map and a compass to even get an idea on where to go. For example, in the first area I found a merchant selling some pretty useful things, though I didn’t have enough tar to spend, so I wandered around killing enemies to gather some more, only to find that I couldn’t find the merchant again, even after I died and went back to the checkpoint. And before you ask, no, there is no point in exploring. In most soulslikes, if you decide to run off the beaten path and explore of nooks and crannies of the areas, you’ll no doubt be rewarded with upgrades to either your healing items or weapons, like in Dark Souls 3 with the estus shards, or in Sekiro with the Prayer Beads, or even Code Vein when you find the memory shards. In this game there is no reason for you to explore, as you’ll find pretty much nothing of the sort as you don’t have any healing items that you regain upon death, in fact healing items in this game are very scarce, and there is a very high lack of things to upgrade, thus making exploring completely worthless in my eyes. Instead it would just leave me to get lost and die and get frustrated all over again.

This game has gotten 8/10’s and 7/10’s all across the board and I honestly struggle to see why. I’m someone who loves any soulslikes and can play them for hours, for example when I first fought Darkeater Midir in Dark Souls 3, I spent four days trying to kill that boss and had an insane amount of fun the entire way through, with this game I can barely stomach to play it for a couple of hours. Even when comparing it to games not made by From Software like Nioh or Code Vein, this game pales in comparison, which is a shame because I love the ideas that this game brings and the idea of possessing bodies seems really fun. In fact it made me think of how much fun it would be to play a soulslike game where you’re able to possess the body of whatever enemy you killed, giving you their weapons, stats and abilities. Sadly though what good ideas it brings doesn’t make up for what it takes away. I do wish Cold Symmetry the best and I do believe that they can make a really good game in the future, but sadly I’m not a fan of this one. If the problems I’ve mentioned don’t discourage you from thinking that you’ll like this game, then I say go for it, as for me though, this is unfortunately the worst soulslike I’ve played and the most disappointing game I’ve played this year.