Notes from: The Future is Gold 2019 Conference 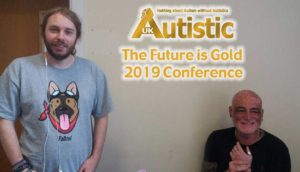 We took some notes from the conference that took place yesterday that we wanted to share.

I should express that it is paraphrased and therefore has been put through the lens of my own interpretation, so it may not reflect 100% the intended meaning of the speakers.

The Future is Gold – Autism Conference

Jamie and Lion – The Future of Technology

Any sufficiently advanced technology is indistinguishable from magic

Jamie is a Senior Research Engineer at the BBC, the goal of which is to improve accessibility for disabled people.

Impairment + Environment = Disability
I.e. we disable people by creating barriers in the environment; impairment is not inherently disabling.

What technology (or magic) can we use to remove these barriers?

These barriers can relate to environment (around us), automation (assisting us), and communication (connecting us).

A good example of using the magic of technology to thrive is through the use of VR. VR can provide a portable sensory room for people to use to relax, or build and explore worlds outside of our reality, which can be stressful and uncontrollable

Communication – ‘Conveying meaning and co-ordinating action.’
Communication and speech are different.
‘The Communication Mountain’ describes that speech lies at the top of a mountain, and it is the job of communication to reach the top of the mountain – some days, when things are easier and needs are met, speech is easily attainable, but on other days (perhaps days with fewer spoons) communication that can be made without the use of speech will be preferred.
Shortcuts to communication are currently available, such as speech synthesisers on Smart Watches (to allow for effective communication without the requirement for speech), or messaging/posting apps.
Re-packaging, or re-interpreting (in the BBC, this comes in the form of translating speech into subtitles and sign language), allows for information to be more freely accessible for people with differing communication needs.

The early ideas for the book came from writing an article for Wired Magazine entitled Geek Syndrome.

Over the course of his career, Steve came into contact with more and more professionals who were Autistic, or who had Autistic family members. Around the time that Steve’s research had come to a head and his research and findings were to be posted, 9/11 took place, and as a result, the article hit the backburners. In the years following, Autism was theorised to be caused by a menagerie of factors, the biggest of which being silicon in water supplies (hence the large number of Autistic people living and working in Silicon Valley, *GASP*), and the the most pervasive, being vaccines.

Steve’s research challenged his understanding a lot of the theories and models that had been suggested up to that point to try to explain Autism, and was alienated from those models as a result. When researching Neurotribes, Steve attended an ‘Autism retreat’ with a bus-full of Autistic people (bearing in mind, up to this point, the general consensus was that Autistic people would never have friends or social connections and never arise to any conceivably successful job prospects), all of whom appeared happy, sociable, and thoroughly enjoying eachother’s company.

Of course, this had completely subverted the ‘textbook’ description of Autistic people and given a true lived experience of neurodiverse lifestyle and how neurotypicality enforces unnecessary social rules on individuals. As a neurotypical on a retreat with an Autistic group, over the course of the holiday, Steve had un-learned many of these social rules and acclimatised to a communication style that he (and the rest of the neurotypical world) was unaccustomed to.

Up to this point, Leo Kanner, the psychiatrist who ‘discovered’ Autism, had theorised (among the multitude of other theories he spouted) that it was caused by refrigerator parents (cold, unloving parents), and disproportionately affected white, middle-class, ambitious, studious individuals, A.K.A. white, middle-class, ambitious, studious individuals, the only population who could afford to have access to Leo Kanner himself.

Steve spoke at length about the role of Hans Aspergers in the emergence of Autism, as well as the recent controversy surround his supposed Nazi associations and will be discussing this topic in forthcoming writings, sharing his depth of knowledge and unique insights into what is a thoroughly interesting and controversial debate.

Jerry Rothwell – Filmmaker behind The Reason I Jump

The Reason I Jump was originally a book written by a 12 year old non-verbal Autistic boy named Naoki Higashida, who, when it came to the film being made (at the age of 23), expressed that he did not want it to be biographical, so that he did not come across as ‘the voice for Autistic people’.

• Hyperfocus
• Sensory overload
• Communication
• Stigma
• As I am

The film follows the lives of young people living in different cultures (UK, US, Indian and African) relating to these themes, expressing how they live their lives and the challenges they face.

5 comments on “Notes from: The Future is Gold 2019 Conference”