Today’s group was attended by 40 people 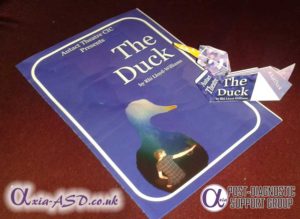 It was another wonderful group and we were privileged to have the play “The Duck” performed in front of us.

The actress, Lucy was superb and it was also wonderful to have the author of the play, Rhi who at the end of the play, which was much enjoyed by all present, was available to answer questions and take comments. A very interesting discussion ensued amongst group members.

The cake of the month is the Sweet Roll, inspired by The Elder Scrolls .

After the usual break, where people could borrow books, get Autism alert cards, etc., there was further discussion about the play and question and answer sessions with the author.

Linda then introduced those present from Axia and went on to remind people about the North Wales Conference. Tickets are now available on Eventbrite and we suggest if people want to come they book tickets sooner rather than later, as it will be cheaper. Also, if anybody knows of anyone who wants a trade stand, please contact the office on 01244 567656.

Linda went on to talk about some recent media coverage of Autistic individuals including the excellent Panorama programming detailing the most appalling abuse. On a more positive note, at the British Soap awards, the Autistic individual in Hollyoaks, who is played by an Autistic person was nominated for an award, but sadly didn’t win. Also, at MCM London they hosted a first YouTuber panel on Neurodiversity, speaking about the rise of Autism online and being an Autistic YouTuber in a Neurotypical media. Linda said about the conference that we had been on called “The Future is Gold” hosted by Autistic UK and these are an excellent organisation, particularly if anyone is looking for an Advocate. Linda and Sue are going to the Westminster Commission next week in relation to the NHS England 10 year plan.

We are as busy as ever but are still seeing people within 10 weeks.

The best way to keep in touch with Axia is to sign up for the monthly round-up, which Dream does for us, and you will be appraised of all the items that have been posted on the website during the previous month.