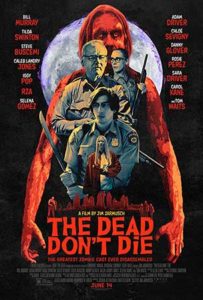 I recently made it abundantly clear that I’m a big fan of horror movies. So, when I heard that there was going to be a new horror movie made by indie director Jim Jarmusch featuring an all-star cast, I actually thought it could be an interesting lambast of the genre. Jarmusch is most famous for making the 1984 film, Stranger Than Paradise, and with this new film The Dead Don’t Die, he brings together an impressive cast including Bill Murray, Adam Driver, Tom Waits, Steve Buscemi, Tilda Swinton, Danny Glover and Selena Gomez. It’s a hell of a cast list to be sure.  Now, I’ve mentioned in the past that I’m in love with the George Romero films which this obviously takes several instances from, and I’ll discuss that in more depth later. I could dive right into everything including a plot synopsis but ultimately, this is a zombie movie – you know what to expect. A town gets slowly infested by zombies and surely enough, the whole thing turns into a massive epidemic over time. The only major difference is that they suspect that the cause of the zombie apocalypse is to do with the fact that the moon is glowing and corporations are fracking. The planet is now misaligned, off its axis and that has caused the dead to rise. Trust me, I have no more clue than you when it comes to how that works. Believe me, if there’s one way to describe this film it is: absolutely insane, but only for a third of its run-time.

Don’t go into The Dead Don’t Die expecting much in terms of a fast pace – this is a really, really slow movie. Despite it only running for an hour and 45 minutes, it feels like it’s going on for two and a half. There’s arguably far too much build-up, meaning the actual zombie apocalypse doesn’t really go into much effect until there’s only about 30 or 40 minutes left to go. But when it does, it goes from zero to one hundred. I really have to question what everyone was on when they made this film. This is without a doubt one of the most unbelievable scripts I’ve ever seen in my life.

Here’s a little reference which many people won’t get, have you ever played Silent Hill and got the comedic ending which felt wildly out of tone with the rest of the game? Well, that’s this film in a nutshell. Everyone plays their character dead-pan at the beginning – and yes, I’m fully aware of that pun – and there are some really weird moments. The two main characters are two cops played by Bill Murray and Adam Driver, the latter of whom (although they’re both guilty) breaks the fourth wall constantly. Even Deadpool wasn’t doing it this much – and that’s half of his character. And that’s not the only baffling part of this film – Tilda Swinton’s character is particularly indicative of its bizarreness, as she plays a mortician who carries a Samurai sword and speaks with a Scottish accent. True, she’s probably the most badass character in the entire film but it’s just insane such a combination came about.   And believe me, that’s not the end of it. There are a few bits and bobs that horror fans will quite like such as one character constantly referencing horror films and wearing a Nosferatu shirt. There are some references to the George Romero films; there’s a zombie played by Iggy Pop constantly looking for coffee because… don’t ask why, I don’t have a clue either. And the whole film ultimately comes across as a clusterfuck of jumbled ideas – I seriously couldn’t believe what I was witnessing on screen.

Yeah, about the whole coffee thing, the zombies in this version seem to have grown out things which they enjoyed in life. Alcohol, Wi-Fi, etc etc. This is supposed to be some sort of subtle commentary on how we have all become zombies. Someone should really tell Jim that George Romero already did that with Dawn of The Dead, and did it way better. Because it was actually – what’s the word I’m looking for – ah yes, subtle. It was subtle. The subtlety levels in this film are so low they make Diary Of The Dead look positively nuanced. (Don’t worry though, that’s not in defence of that car-crash.)

I truly hope you liked the song that plays in the beginning, The Dead Don’t Die by Sturgill Simpson because you are going to hear it a lot. I got bored of it by the third playthrough. How do I put this? Watching this film, you go through several stages: Boring… Boring… Don’t care… OH MY GOD WHAT IS THAT?!

Now, there were a lot of moments that legitimately made me laugh, including an insane plot twist that was out of nowhere. I was so glad I wasn’t drinking anything as I would have done a spit take. It was at that moment I was convinced that some drinking was involved in the writing department – no sober person would have come up with this. I’ve seen games of Cards Against Humanity which made more sense. Not to mention, the cast feels so wasted in this film – no one’s in it long enough to make much of an impact. What’s the point of casting Steve Buscemi to play a racist farmer only for him to not be in most of it and only get his comeuppance from a distance? And while we’re on the topic of wasted cast members, who the hell’s idea was it to hire Tom Waits to play a hobo providing a sort of DVD commentary over the proceedings from the woods?

Billy Murray’s hilarious as always, but like many roles he’s done in recent memory, he also feels rather wasted; sometimes it almost seems like he’s not in it. This film’s one of many which makes me think he’s not having much fun on screen anymore. And it’s a real shame because after The Jungle Book, I thought Murray was going to have a real resurgence. Maybe he’ll show up in this upcoming Ghostbusters film and get something spectacular to do in that but at this point, I’ll take his career as it comes. Also, despite the previously mentioned dragging pace, it somehow also manages to feel like a hacksaw’s been taken to the editing department. There were several characters who were introduced as though they were going to be a big deal only to have most of their plot cut entirely. One of the characters plotlines doesn’t even have an ending, it just sort of… stops.

The Dead Don’t Die feels like a film that was made on a dare. It’s got some of the most insane choices in scripting, casting and general direction, I would have loved to have been a fly on the wall during the making of this thing. It’s mind boggling how insane it was. Unfortunately, most laughs it gets will be unintentional. Most of the time it attempts genuine humour, it’s a case of, ‘Do you, um, get it?’

If you like traditional zombie movies, this is not the movie for you. What’s worst, The Dead Don’t Die really hasn’t benefitted from coming out after we’ve had several seasons of The Walking Dead (albeit of varying degrees of quality) but also the critically acclaimed video game The Last Of Us preceding it. It feels like a film which had some great ideas but was very much lacking something to keep it all together, as though the people involved were each throwing things at the wall, hoping something would stick. While it’s not actually a terrible movie, and most of the time when there’s a film like this I’d say skip it, I’m going to say the opposite but this time. Go to see this movie just for the final plot twist. You have to. I am never going to reveal what it is before everyone I know has seen it just because of how insane it is. You have to see this movie purely for that alone. Though, be prepared, you’re going to be sitting through a lot of dredge to get to it.

Well, that’s it for another week for me. Next week, I’m going to be reviewing the last of the three live action Disney remakes to be released this year, with Jon Favreau’s The Lion King. With all that said, I hope you enjoyed reading this review as much as I enjoyed writing it. See you next week.
Calvin – Nerd Consultant
Share This Post: