The law on mental health is changing – NAS 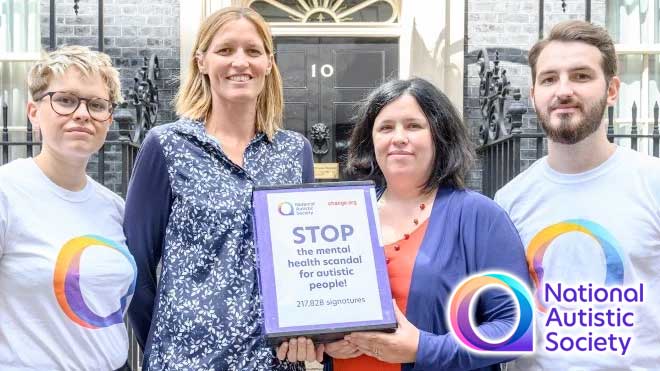 You helped us change the law

This week, we had some good news and we wanted to share it with you.

For years, we have been campaigning to change the law on mental health in England and Wales. At the moment, the law allows people to be sectioned because they are autistic – even though autism isn’t a mental health problem. This has led to autistic people being locked up and mistreated in inpatient units.

Alexis Quinn was one of those people – she’s the second from the left in the picture above. She spent several years in psychiatric hospitals:

“The reason I was there was because I am autistic and other people, who were not experts in autism, decided I should not be allowed to leave. Whilst there I was drugged, restrained, secluded, put in long term segregation. I was mistreated.”

We worked with Alexis to launch a petition which over 200,000 of you signed – thank you to everyone who supported it. Together, we took it to 10 Downing Street and the Government agreed to review the Mental Health Act.

On Wednesday, the Government published their proposals to change this law, which should result in much fewer autistic people unfairly sectioned. This is a huge step forward and we are so grateful to our campaigners for sticking with us. You can find out more details of the proposals below:

This won’t end the mental health crisis for autistic people – we still need more investment in mental health and social care services. However, we know that together we can achieve real change, and we are committed to keep campaigning. We will not stop until everyone like Alexis gets the support they need.