Another great day today at Axia!
Bev has alerted me to the ‘Natural Voice Network’ which is a singing group for people with Learning Disabilities and Autism. You can find out more on their website: https://naturalvoice.net/
There is also a group run by Ella Speirs which is based at The Storyhouse Library in Chester; people can play songs and sing along. They are also on Facebook as the People’s Choice Group. This may be of interest to some people.
We would also like to make you aware of an online webinar for families with autistic children of any age (including adults) that may be of interest to you entitled: ‘Helping autistic family members who feel anxious about the future’.
This is a follow up to a previous webinar which proved very successful. You can find further details by following this link:
https://www.eventbrite.com/e/helping-autistic-family-members-who-feel-anxious-about-the-future-tickets-104081133472
Calvin has also done another review for you on ‘Persona 5’. Again, have a read and decide if you would like to purchase this game or download it 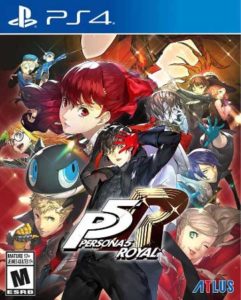 (Available on PlayStation 4 only)

There was no game I was more excited about getting in 2020 than Persona 5 Royal. Persona 5 was my game of the year and like with Persona 4 Golden, Persona 5 royal would act as a rerelease of the game with tons of added content to act as the definitive version of the game. to such an extent that all the way back in the autumn of 2019 I pre-ordered the Phantom Thieves edition of the game which came with an artbook, soundtrack cd, replica “Joker” mask and dynamic theme for my PS4 but good luck finding a cheap copy of that edition now. Forwarding from this point on I’m writing this as someone who’s played the original Persona 5 and really immersed themselves in it so I won’t be talking much about the game as a whole and rather be talking about what Royal added to the experience though I will avoid spoilers almost entirely. For the uninitiated, Persona 5 is a RPG in which you play a student on probation after being falsely implicated in an Assault resulted with him moving to Tokyo to attend Shujin Academy and rehabilitate himself as part of his sentence, he then discovers he is part of a group of people that can travel between realities based on other peoples distorted desires known as palaces and work alongside a group of friends to form a group known as the Phantom Thieves in order to steal their personal treasures in each of these palaces in order to make them confess to their crimes using spirits known as Persona’s to combat their enimeis. Like most RPGs you build up experience through grinding through battles but you also gain new abilities through hanging out with your friends outside of palaces since that reality is based of people’s cognition and strengthening these bods makes you a stronger person. The game runs on a limited time so choosing what tasks you do in each of the in game days adds an extra level of strategy since even though this is a Really long game with a single playthrough of the game lasting about 70 hours at absolute minimum you won’t be able to fully get through every single character’s arc on a single playthrough. Think of it as being like an Anime simulator and while your enjoyment of Anime is not entirely predicated on your enjoyment it does help. Think of it like a cross between Pokemon, Final Fantasy and a social simulator. Criticism has been levelled at developer Atlus for this re release since with Persona 4 Golden was released on a different console to it’s original model so charging full price for a re release had justification whereas Persona 5 Royal has been released on a console that is perfectly capable of add on DLC. In my opinion the game has enough new features and locations to justify being more than a glorified downloadable add on and sold at full price (at this point in time £50). This includes new enemies, slightly altered boss fights which kept me on my edge and lead to a few unexpected deaths, new battle tactics, new locations for stuff to do in the after school and evening sections of the game and of Corse new playable character Kasumi who was heavily part of the advertisement for the game. I actually was surprised how well she has been inserted into the already excellent plotline along with another new character, but she does fit in well. however, if you don’t fill in the criteria to unlock the new extra gameplay known as the third semester you won’t get to play as her much almost making her an unlockable character. this is obviously so the actors don’t have to record much new dialogue and the studio doesn’t need to make many more new animation sequences which once again have been made by Production I.G. however it does bother me slightly that much of what’s new for this game is locked behind certain criteria which the game only really indicates you should take priority in doing as your coming up to the deadline. Players who played a lot of the original game will obviously take this on since fulfilling it requires hanging out with the new confidants. Still I would really recommend looking up a guide on how to get the true ending, you can find many guides on how to do online that don’t give away spoilers.

Overall thoughts: if you Haven’t played Persona 5 yet now’s the time to jump on the bandwagon. It’s one of the best constructed RPG’s with great characters, story, soundtrack and combat. It’s just sheer enjoyment and still in my top 5 all time favourite games and Royal is now the definitive edition of the game and is highly recommended

Would recommend buying either physically or digitally, it’s not a large file size but you may need to clear out some space on the PS4 hard drive in order to have it on your PS4 but don’t delete Persona 5 to do it since you get some bonuses for a Persona 5 save file. Digital pre order bonuses are gone so the only way to get them now is to buy a new and not preowned physical copy of the phantom thieves edition.
Calvin – Nerd Consultant
Share This Post: